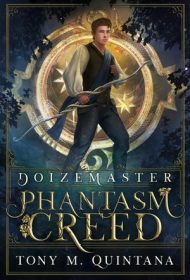 Doizemaster: Phantasm Creed is a traditional, fantastical hero’s journey featuring Dashiel Ermitage, an unremarkable librarian’s apprentice and average teenager living in the city of Azahar who dreams of grander adventures.

Azahar has long been shielded from the vagaries and violence of the surrounding empire of Zaphyrelia, an “outerland” where the evil ruler Abelon Asedia reigns mercilessly over the land. With armies of soldiers and mechanical monsters known as Ochre Brigadiers at his command, Asedia has turned the empire into a place of cruelty, pain and suffering.

The forested town of Azahar has been spared that fate, thanks in part to Gailfaur, a “forest deity” whose mystical powers maintain a protective barrier against invading forces. But when a pair of Ochre Brigadiers find their way past the barrier, Dashiel answers the call. Armed only with a magical baton, he heads into the forest to save his friends and battle the evil forces.

Dashiel is then recruited by representatives of the Cobalt Phantasms, an order dedicated to resisting Asedia’s tyranny and restoring peace to the outerlands. Joined by a fellow, mysterious recruit named Sylvain Aurante, Dashiel leaves Azahar to train as a member of the order, ultimately crossing paths with its founder, Master Roderigo Regallette, and finding his role in an epic battle for the realm’s future.

This is a compelling read combining relatable themes of adolescence with the ingredients of an immersive, epic fantasy. Tony Quintana manages to enliven the familiar elements of Dashiel’s progression from clueless teen to seasoned warrior, while investing his characters with plenty of relatable traits. Dashiel’s dedication to his friends and family, his determination to make a difference and his struggles with love, loyalty and conflict serve as the novel’s real heart, without sacrificing engaging action or imaginative fantastical elements of the Zaphyrolean Empire.

This could have been a rather standard hero’s journey, but Quintana’s dedication to character and to basic human nature enriches the tale, creating an entertaining reading experience.