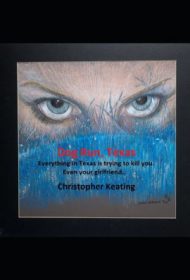 In Christopher Keating’s Dog Run, Texas, a grieving attorney retreats to rural Texas, where he discovers a place he might eventually be happy to call home — if he survives the experience.

The protagonist is Dallas Williams, a renowned patent attorney who recently suffered the loss of his wife and son in a tragic accident. He retreats in grief to the titular small town, a strange place, populated by, among others, two argumentative old coots who might be geniuses; a mentally ill gentleman who thinks he’s being pursued by aliens; and a bigoted city council member who finds Dallas disagreeable.

The bigger threat here is Dallas’ new girlfriend Stormy Weather, a twice-divorced artist with a hot temper and a jealous streak. Although their relationship is sexually charged, they disagree on the quality of life in Dog Run. He loves it, and she thinks the small town is tragically backwards. As one local notes: “Basically, everything in Texas is trying to kill you. The animals, the bugs, the diseases, the weather, the landscape… It’s probably why Texans are the way we are. You have to be a little crazy to love something that is working so hard to kill you.”

As the story evolves, Stormy’s increasingly unhinged attempts at revenge against Dallas for his imaginary trespasses (primarily she thinks he’s cheating on her) hurtle towards black comedy. The plot mixes legal showdown, deceit, blackmail and sheer madness.

A mash-up between a western and John Grisham novel, the story is an entertaining and unpredictable read. Stormy’s villainous transparency hamstrings the plot somewhat. And while the potentially lethal conflict between Dallas and Stormy is comical, the legal shenanigans involving fights over a potentially lucrative patent feel like filler.

Nevertheless, the writing and pace is crisp, and the eccentric humor is enjoyable. As for thrills: take a good man and surround him with deceit, attempted murder, blackmail and other crimes and you’re bound to get readers turning pages.