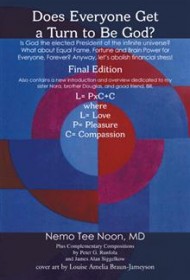 Nemo Tee Noon is a man who faces many challenges. Mental illness, learning disabilities, confusion regarding his sexual orientation, and his estrangement from his only daughter lead the author to speculate about the origins of suffering. In this philosophical memoir, Noon attempts to make sense of his turbulent world.

Noon presents a cosmological theory. He posits that every mind/soul in the universe is a self-created particle that can pass in or out of existence at will. The Earth is the center of the universe. The mind/souls that do not live on Earth are jealous of its centrality and they are responsible for the suffering on our planet. Noon holds that there is a god, but, like the office of President, the “position” of god changes hands periodically. He reasons that if there were only one god for all eternity, then the other souls in the universe would become consumed with jealousy and will themselves into non-existence. Therefore, he holds, we all take turns at being god.

This system rests on the emotion of jealousy, and, like medieval cosmologies, makes the entire cosmos revolve around mankind. Noon claims that his ex-wife had diagnosed him as having “narcissistic features” and his cosmological theory perhaps bear that out.

The text includes many repetitions of the same facts. For instance, we learn several times that the author’s life partner was born in 1926. The book contains two non sequitur essays by friends of the author. The most coherent section of the book is the Epilogue, where the author pays tribute to his parents. These authentic and affectionate portraits are untainted by bizarre cosmological speculations.

The book is a smorgasbord of strange theories embedded within the tale of a man who is at odds with himself. While its audience is likely highly limited, it’s a testimony to a gifted but seemingly troubled mind.