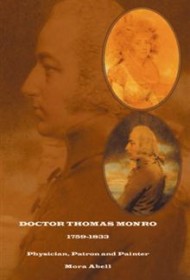 Thomas Monro, treated the insane in Bethlem Hospital (better known as Bedlam), specialized in watercolor treatments of English landscape, and mentored many fine artists–most notably J.M.W. Turner. It has been difficult to give a full account of Monro’s life because so much of the material required for a fully developed biography remains in the hands of family members. Monro did not keep a diary and does not seem to have been much of a letter writer, judging by samples of his extant correspondence.

Even so, Mora Abell has produced a sound narrative of a fascinating 18th century figure. Monro took an early interest in art, influenced by his father John, also a physician to the insane and an art collector. The younger Monro, however, was never meant for medicine. He turned to this profession only after an older brother, destined to succeed John Monro, died. The conscientious and dutiful Thomas immediately volunteered to carry on his father’s work.

Thomas Monro had the honor of attending to George III when the king went mad. But Monro later was forced to resign from his position at Bethlem Hospital after charges (never proven) that he had neglected patients. Abell believes Monro was an excellent physician–his letters reveal he would not diagnose patients without observing them over a sustained period–but a poor administrator.

But Abell also suggests Monro’s first love was art, a field where he contributed a fresh, observant eye and welcomed aspiring artists of all classes. If there is a connection between Monro’s medical work and his art, Abell has not found it. But her meticulous assemblage of sources and engaging narrative make her biography an important contribution to an understanding of 18th century art and culture.