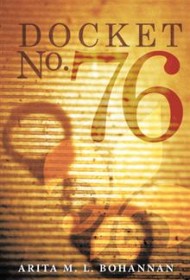 Few things inspire a quicker desire for justice at all costs than the abuse of a child. In Docket No. 76, New Orleans Assistant District Attorney Sandra Morgan must struggle to stay present while prosecuting someone with dark ties to her past.

Sandy is ready to prosecute a man accused of heinous acts against a five year old when, seeing him in court for the first time, she recognizes him from her own traumatic past. Unwilling to recuse herself, she risks losing the case in order to pursue a man she’s certain is guilty. Along the way, there’s a hint of romance with a colleague and some quality time with her father at the family’s getaway cabin, but the pursuit of justice is paramount.

Author Arita Bohannan paces the story well, and if her courtroom scenes veer into melodrama, that’s forgivable given the subject matter. The writing tends to be dominated by clusters of exposition followed by bursts of action; integrating the two would smooth things out considerably. (For example, Sandy’s appearance is described over several paragraphs, when a few telling details could simply be portioned out as she goes about her business.)

There’s one plot point that strains credulity beyond breaking despite an explanation at the end, and the rough justice meted out at the story’s climax is also a bit hard to swallow (though very satisfying).

Even taking those issues into account, legal thriller fans should enjoy Docket No. 76. Good versus evil in a Big Easy courtroom is always hard to put down.