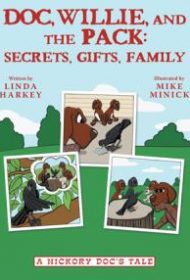 Willie seeks entry into the home where his dog friends live, hoping to eat some of the dogs’ food. But his attempts to pass through the doggy door meet endless obstacles: first, with his bad eyesight, he hits the doorframe instead of the door; then the wind blows him into a potted plant and, later, into a puddle.

Eventually, Willie gains entry by accident. But instead of eating the dogs’ food, he pecks on the refrigerator door, and the Food Giver, a human, gives him a treat of crushed walnuts in a shiny wrapper. With the dogs after him, Willie rushes out an open window.

Later, newsmen arrive to do a story about Willie and the Food Giver, and when the other dogs read the subsequent article, Willie’s secret is revealed: He’s been flying through the window regularly to get walnut treats, leaving the shiny wrappers around the yard. The dogs confront Willie, advising him that “[…] families don’t keep secrets from each other,” and all ends well.

The narrative features lively characters, and children will enjoy the animals’ antics as the dogs bump into objects and each other. Mike Minick’s art captures the visual humor nicely.

The plot, however, is frustratingly convoluted. Most of the book’s first half revolves around Willie trying to get into the house. As the story shifts to the newsmen and Willie’s secret, connections between these subplots become confusing. Without a solid focus, the moral falls flat.

The text is also hampered by minor errors (“I use [sic] to drag the walnut shells out to the street”) and awkward sentence construction (“The large flat leaves along with Willie dropped to the grass”).

The book requires significant revision. Still, its memorable characters and humor may appeal to elementary readers.