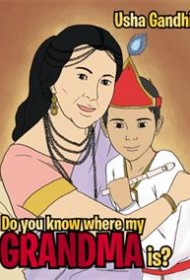 Inspired by her grandson, Usha Gandhi has written a picture book honoring their relationship titled Do you Know Where My Grandma Is?

The book follows a pattern: a full page illustration stands opposite a page of text telling about the bond of boy and grandmother. Virtually all of the text pages include the words: “But today, I am kinda sad, lil bit confuse [sic], I don’t know where my grandma has gone.” And every page but the last ends with “Do you know where my grandma is?”

This repetition becomes wearisome after a while, but more distracting is the imperfect English used throughout. Whether due to unfamiliarity with the language, lack of thorough copyediting, stylistic strangeness, or all of these, readers are faced with often confusing lines such as: “Pass my bad time, shhhhhhhhh….” and “I make disappear puree.”

In addition, the question of grandma’s location is never answered. The text gives the impression of a child who is lost or genuinely doesn’t know where his grandmother is, while the illustrations, which are generally appealing, show daily activities shared by the two together. On the last page, the perspective shifts to that of the grandmother asking “Do you know where my Mataka is?”

There’s talk of an image on a computer screen, so presumably there’s some distance between the boy and his grandmother, but it’s not specified. The book ends with both wondering where the other is, and no answers as to when, or if, they will see each other again.

It’s unclear whether Do You know Where My Grandma Is? is meant as an outright lament on being separated from a loved one, or as a celebration of the bond that exists (existed?) between them, or both. Whatever the intent, the story’s message gets muddled along the way, resulting in a narrative that will confuse rather than engage its audience.