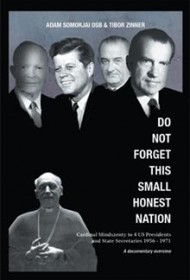 From 1956 until 1971, Hungarian Cardinal Joseph Mindszenty (who claimed both feudal and ecclesial titles: Prince Primate of Hungary and Archbishop of Esztergom, respectively) took asylum at the United States Embassy in Budapest. Do Not Forget presents the complete (as best the researchers can determine) content of letters sent by the Cardinal to four U.S. presidents and their Secretaries of State over the 15-year period.

The Cardinal was convicted of treason in a 1949 show trial by the Communist regime. After being freed from prison by loyalists during the 1956 uprising, he had only a few days’ liberty before invading Soviet forces compelled him to take refuge at the U.S. Embassy. In his many years as a “guest” of the American Embassy, Mindszenty never compromised his hard-line views against communism and fascism while maintaining a strong degree of patriotism; his steady stream of letters to American officials implored the U.S. to intercede on Hungary’s behalf. Virtually all his appeals were acknowledged, but not responded to, save for two perfunctory replies from Presidents Kennedy and Nixon.

Primary source works such as this offer readers a pure, unfiltered look at the topic involved. After each letter, the authors offer their commentary, which often reveals the Cardinal’s increasing level of depression and frustration. This allows readers to understand Mindszenty on a personal level, and stands in contrast to the overly formal tone of the letters themselves.

The merits of this book will be best appreciated by the serious scholar of Eastern and/or Central European political history. The book’s encyclopedic nature of Mindszenty’s correspondences over four U.S. administrations serves as an excellent resource for those engaged in detailed research of the post-war era behind the Iron Curtain and will no doubt be a valuable library reference book.