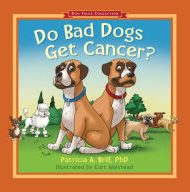 Inspired by the experiences of her own pets, Patricia Brill offers children a way to better understand cancer with her skillful children’s picture book Do Bad Dogs Get Cancer?

Brill, an exercise expert, bases Do Bad Dogs Get Cancer? on her own dogs, Turbo and Boxster, and Turbo’s experience having cancerous moles removed. The book delves into the process, with the dogs granted the ability to speak for storytelling purposes, as Boxster gently insists that his ailing friend Turbo visit a vet. After tests and needles, it’s revealed that surgery will be required, and Boxster shares what he knows about cancer treatment and recovery. The operation proves a success, and by story’s end, Turbo is once again playing with his favorite toy.

The information is delivered mostly via dialogue between Turbo and Boxster, which makes the book feel more like a conversation between two friends than a technical guide to cancer, despite plenty of insights into terms such as “chemotherapy” and “remission.” Overall, Brill does an excellent job creating a template into which children can place themselves or people they know who are facing cancer. When Turbo shares his concerns about how he’ll be treated, it parallels a situation children face regularly: “Now other dogs without cancer will look at me like I am different. They won’t want to play with me at the dog park because they’ll think they might catch cancer.” Boxster lovingly reassures him this is not the case.

Curt Walstead’s illustrations are excellent, offering enough details to identify a doctor’s office or medical device, but still keeping the focus on the characters so that the expressions of Turbo, Boxster, and others convey their moods without requiring words. A few minor issues with missing commas don’t seriously detract from the story.

Cancer isn’t a pleasant subject, but Do Bad Dogs Get Cancer? strips away much of the mystery and fear. As such, it is heartily recommended for any young reader.