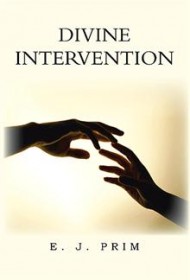 Divine Intervention, the first novel in what looks to be a trilogy, delivers a romance with several interesting plot twists to hold readers’ attention.

When Angela hears that a brain tumor is threatening her life, she looks at her unhappy marriage and begins to wonder about Devon, her college boyfriend and soul mate — and the one that got away. Coincidence reunites the two, and she initiates divorce proceedings against her husband. But her happiness is threatened. Will Angela put herself first, or is there someone more important she must think of?

Author E.J. Prim knows the marks to hit in the romance genre and keeps the plot moving along nicely, but words are frequently misspelled or misused (for example, a character’s feet drag “as if they were casted [sic] in cement,” and instead of “based on” or “going by,” Prim writes “Basing by the look”).

Additionally, the story relies on some improbable scenarios that generous readers will overlook, but one in the finale requires that disbelief be suspended too far: Three characters can be in a love triangle without each knowing about the other, but not for six months, and not when two of them are parent and child — copious head bandages to disguise identity notwithstanding. Working so much plot into less than 100 pages also means the characters and settings are not richly detailed.

Divine Intervention ends with a new romance blossoming out of one that never took flight and raises the question of whether this love will survive. While the writing could use polish and development, many readers will be curious to know what happens in the sequel.