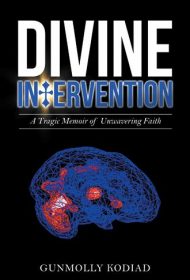 In Divine Intervention: Tragic Memoir of Unwavering Faith, Gunmolly Kodiad offers an unflinchingly honest account of his life’s journey, including the many challenges he has faced.

Kodiad notes that he’s an “orthotist” (a healthcare professional who makes and fits braces and splints for people in need of them) and son of an orthopedic surgeon. The memoir opens as the author describes his unsuccessful attempt at suicide. He then offers glimpses of traumatic experiences he has endured, including his brother’s death; his divorce, which left him feeling like a failure; his step-daughter Brayly’s recurrent seizures; and his mother’s ailment that left her immobile. Throughout, he often mentions his wish to die.

The book is parsed into brief chapters, with writing that’s empathetic, heartfelt, and often painful. Kodiad comes off, alternately, as pragmatic and driven (e.g., his unswerving research to determine the cause of Brayly’s horrific seizures—an endeavor he succeeded in), and unhinged (“My legs feel like insects were [sic] crawling on them. Something was wrong. I was getting very depressed,” he writes at one point).

This panicked, chaotic sense is reflected in the narrative style, which jumps around in time and is replete with digressions and jarring transitions that make following the story’s chronology difficult. The author mentions something significant, but then changes the subject before exploring what happened. While the ending clarifies some things, getting there is challenging. Partial sentences, shifts of tense and other grammatical issues add to the problem.

The author hints at a possible cause of the book’s disjointed nature when he notes: “I am constantly jacked up. I kid you not. I have slept an average of two hours per day for the past three weeks. I don’t do drugs, but you would think I inhale an eight ball of cocaine a day.”

While readers will sympathize with Kodiad and his problems, the book is more frustrating than enlightening. It requires revision before it’s likely to appeal to an audience.