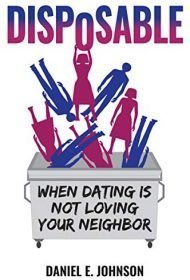 In Disposable: When Dating is Not Loving Your Neighbor, Daniel E. Johnson exposes the root of selfishness pervading the dominant dating culture of today and offers a better way to find love in the 21st century.

Johnson is a skilled wordsmith whose discomfort with the modern dating scene spurred him to research and pen his concerns. He states, “The dominant dating culture would…have us believe that people are disposable—that they are to be used and then discarded.” He clearly contrasts this mindset with “the unconditional love called for in the Bible” and suggests people focus on developing true friendships rather than self-indulgent fantasies. Johnson believes shifting the focus from “what can I get?” to “what can I do for others?” will lead to stronger, more meaningful relationships, less heartache, and fewer failed marriages.

Throughout, Johnson’s clear insight into the unhealthy motives that prompt a person to romantically pursue another is honest and sobering. His quick, concise analysis of the modern dating culture lays bare how people manipulate and use others to boost their ego, satisfy lust, fill emotional voids and more. Equally impressive is his grasp of the biblical principles that he believes can remedy the epidemic of discarded, hurt ex-lovers who may never fully recover from rejection and feelings of worthlessness.

Johnson also includes a fascinating look at the history of courtship illustrating that “dating is a relatively new phenomenon that arose in America in the early 1900s.” Though a “good culture” may “provide a check on bad behavior,” he proposes that “the human heart …remains unchanged since the fall of the human race (Genesis 3).” The best answer to the problem with dating is the Bible’s “great commandments to love God and our neighbor and…build inter-gender relationships around friendship.”

With end-of-chapter discussion questions and a non-preachy tone, Johnson’s work is a must-read for anyone, Christian or otherwise, who is pursuing a romantic relationship.