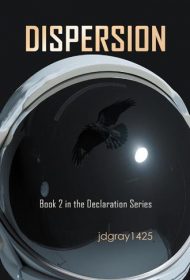 Grand-scale in every sense of the word, the second installment of jdgray1425’s Declaration saga (after 2018’s Determinate) revolves largely around humankind’s first attempt at colonization outside of the solar system as a fleet of starships carrying 30,000 people sets out on a historic journey to a distant planet.

The story is initially set in 2310. Esther Patel and her family are passengers aboard one of the colony ships. But even as the ships ready to depart on the centuries-long journey where the passengers will be in hibernation pods for the bulk of the trip, she wonders why her husband Basim—a successful farmer who was content with his simple life raising their children with his wife—would suddenly want to leave everything he loves for an unknown future.

As the fleet begins its voyage, back on Earth a group of technophobes—people uneasy about recent radical advances like Mindwear technology (essentially cranial interfaces that enhance memory and communication)—splits from society and creates its own low-tech civilization, embracing a simpler existence. The reasoning is clear and profound: “People don’t understand what it means to be human anymore. All this technology is unnatural.” As decades pass, time dramatically changes both groups.

The story is packed with deep conceptualization, scientific speculation, and multiple storylines spanning centuries. However, the strength of this speculation—post-humanity, immortality, the impact of interdimensional space travel on humans, etc.—overpowers the characters’ various story arcs, giving the reading experience an emotionally detached feel. Having major characters as artificial intelligences adds to the problem.

However, although the novel isn’t character-driven, the themes explored—particularly humankind’s relationship with technology—power this narrative to the end. The author concludes the novel with a tantalizing plot seed for a third novel.

While flawed, this is ultimately a thought-provoking, epic tale of humankind’s struggle to break the chains of its past transgressions and evolve into something more than human.