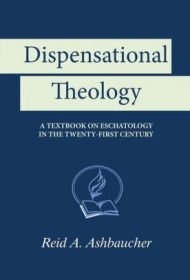 Reid A. Ashbaucher delivers an intelligent, well-organized, readable textbook on eschatology (the study of the end of the world) through the lens of dispensationalism (the theological system that tries to understand the revelation of God through different epochs of time). This is no small feat since both topics involve spiritual interpretations, symbols, intricate methodologies, and odd figures of speech used in the biblical exploration of end-of-the world prophecy.

Anticipating the inherent difficulties, the author opens with a glossary of important ideas and phrases, as well as histories of early theologians and their views on the End Times. This helps readers understand what follows, including explorations of a amillennialism, premillennialism and postmillennialism; methods of interpretation of prophecy; Old and New Testament covenants; and the key differences and attributes of the tribulation and rapture, among others.

Ashbaucher does an excellent job of making complex topics digestible. For instance, in his chapter on the fate of Israel and the Church in End Times prophecy, a controversial subject in theological circles, he argues his points methodically and clearly, ultimately offering the dispensationalist view that the two spiritual bodies “are functioning on two separate tracks, heading toward unification, as one body at the end of the age.” In other words, God continues to have plans for both the nation of Israel and the holy Church.

The book is thoroughly researched and expertly footnoted, lending authority to its prose. It’s important to note that it is not for beginners; the author targets third-year theology students. While readers don’t need to be in college to understand the ideas, they do need an ample knowledge of the Bible and a basic understanding of hermeneutics to get the most out of the narrative.

Overall, Evangelical Christians and students of Christianity will find this a masterfully presented look at dispensationalism and end-of-the-world prophecy.