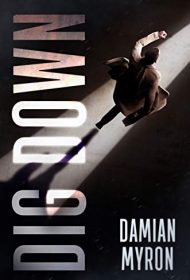 Damian Myron’s Dig Down is a fast-paced thriller about a man trying to evade capture by his many enemies, including the FBI.

In this novella, Rob Moore is on the run, accused of insider trading, prostitution, bribery, stock manipulation and drug smuggling. The story is told in two time frames. In the first, Rob arrives at his estranged father’s house, clearly in trouble and seeking help. This plotline explains their past, Rob’s current problems, and answers the question of whether Rob’s father will help him or not. The second time frame follows Rob as he leaves the house later that day. Rob is being pursued by a range of enemies, and some high-octane chase scenes occur as he tries to flee the country.

Although the two timelines alternate, the chapters are short and the transition between the two — including unclear time lapses — is jarring. Also, what appears at first to be the main story, between Rob and his father, in fact becomes the back story as events unfold.

Dig Down’s many characters can be difficult to keep track of, and some have several names, causing further unnecessary confusion. For example, Cowboy, one of Rob’s pursuers, is also called Axel, and Rocco, another enemy, is also referred to as “the sociopath” and “the psycho.”

The novel’s real strength is its action, which unspools almost like a movie script. Dig Down offers dramatic chase scenes, explosions, gun-fights and enough death and mayhem for a much longer novel. Although Rob is an anti-hero, with no redeeming features, it’s impossible not to turn the pages and see what happens to him, even as his actions increasingly reveal him to be the villain.

At 133 pages, this book is too short to properly develop the characters involved. Still, those who can forgive the confusing moments will find that Dig Down is a fast-paced, page-turning thriller that propels readers to the end.