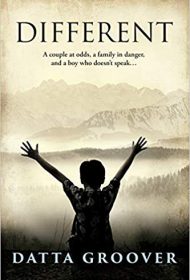 Datta Groover’s Different is an absorbing, inspirational novel that explores marital conflict, secrets, a family at risk, and the special abilities of a borderline autistic child who doesn’t speak.

The MacBrides seem to be a typical Oregon couple with three children. Frank, who works at Lake Oswego Public Works, is known as “the pump whisperer,” for his keen ability to sense problems before they occur. He’s a conscientious family man but has a tendency to flirt, which annoys his wife Sofia. She’s a former school counselor, who now homeschools their smart, yet silent, youngest special-needs son, Sam. To avoid the problems Sofia witnessed in her own parents’ marriage, and to keep their relationship on track, the couple is seeing a therapist.

Unfortunately, things quickly go astray. The family is forced to move due to long-hidden secrets resulting from Frank’s deceased father’s decades-old nefarious dealings with the Italian government and mob affiliates. In addition to this stress, Frank deals with conflict with his new boss; a Fatal Attraction-style affair, and a growing awareness of son Sam’s intuitive gift to help those in need. Sofia’s therapeutic journaling woven throughout adds another layer of texture and insight to the characters.

Overall, the story is driven by action and weighty dialogue that keeps readers engaged. Thought-provoking conversations are sparked when Sofia seeks religious counseling, inquiring whether Sam’s condition might be the work of the devil; the priest views Sam as the opposite of evil and feels God has a wonderful plan for him. Meanwhile, Sofia’s psychic “hippie friend” sees Sam as an old soul with the aura of a healer, and a silent spiritual monk connects with Sam during the family’s vacation in Nepal.

In all, the narrative delivers an emotionally engaging drama. While the book’s final wrap-up may seem a little too convenient, and Sam’s nighttime wanderings to help others seem implausible, readers will appreciate this story—one that that recognizes the power of love, family commitment, and healing.