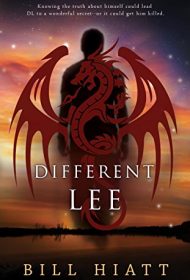 The first in a series, this entertaining urban fantasy explores dragons, vampires, fairies, ghosts and other magical creatures warring and living among us.

The story is set in a small Wisconsin town named Le Dragon, which had been intended to support a dragon-based amusement park, but the park never opened. It concerns a 20-something drifter known as DL, for Different Lee. His life consists of bedding young women until he runs out of potential conquests, then moving to a new location. But life changes when he spends the night with a beautiful vampire named Ekaterina, who informs him that he’s part dragon.

Soon DL, his friend Max and Ekaterina face a powerful dark magic vampire known as The Collector. The Collector craves the blood of a good vampire (Ekaterina) and DL’s rare dragon blood. This conflict between good and evil results in war between its major players: Enlisting the aid of Max’s eccentric family and some supernatural creatures, DL attacks The Collector and his goons at the abandoned amusement park and a supernaturally charged vampire lair, where DL and friends seem hopelessly overpowered.

Author Bill Hiatt’s vibrant descriptions of the town, amusement park and the land of vampires are imaginative. For example, he describes the vampire’s castle as something that “seemed … to be a part of the dismal landscape, growing from it like a tumor from dying flesh.” Humor helps keep readers engaged throughout the story. When a girl flirts with buff DL in front of nerdy Max and his friends, it was “as if a real Vulcan had showed up at their Star Trek convention.”

Unfortunately, character development is less noteworthy, especially in the romance between DL and Ekaterina. Their relationship begins as an unsatisfactory one-night stand and ends in true love despite few interactions. The writing generally flows smoothly, but another round of proofreading might have caught some distracting mistakes.

Despite these issues, with its young-adult protagonists, mild sexual innuendo, supernatural elements and pop cultural references, Different Lee is a promising start to a proposed new series.