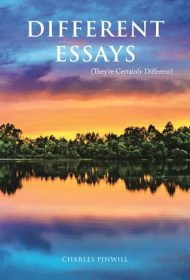 In Different Essays, Australian writer Charles Pinwill alternatively refers to himself as a “mongrel dog” and “an essayist on the verge of sanity,” by way of indicating he doesn’t accept many of society’s norms and intends to shake other people out of “the confinement of (their) conditioned (shells).”

Pinwill’s pieces focus on politics, economics, and the problems of national debt, but also address other topics—psychological, historical, theological, and etymological—mainly “for fun.” Thus, a polemic on the word “utilize” is sandwiched between a discourse on scurvy and an epistemological inquiry comparing electricity with money.

Pinwill’s favored topics involve the “money system (which) is rigged to govern (citizens) more surely than any parliament”; the takeover of Australia by Asians; and the need for a “voters’ veto” mechanism,” which the Australians, like the Swiss, could use to force a referendum on an issue.

Pinwill’s writing style is brisk, forthright and, sometimes, unashamedly irascible (e.g., he states, considering world debt, that politicians “are either far too pig-ignorant or they don’t want to know because then they would have to get off their fat buttocks and do something…”)

Unfortunately, discussions concerning voter veto, voting out sitting parliament members, and several other topics appear in more than one essay. The author claims, in his preface, that the self-containment of each essay makes repetition unavoidable, but this stance will make Different Essays a difficult slog for most.

Most will also have problems with Pinwill’s incomplete presentation of issues in some essays. For instance, he claims that “Australia will be predominately Asian racially within a century,” but does not supply statistics to support this view, nor address how ironical his concerns might be to indigenous Australians.

Pinwill does have some original approaches, however, such as his analogy between electricity and money, and an edited version of Different Essays might well be of interest to those concerned with politics and economics.