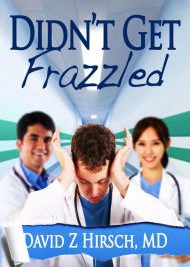 Readers can probably guess the novel’s tone from the title of its first chapter, “A Beautiful Slice of Dead Penis,” which depicts a medical student so arrogant he offers to eat any body part he can’t name. Our protagonist and window into this strange fishbowl is Seth Levine, a first-year medical student at NYU who is on the downside of his relationship with live-in girlfriend, April.

Hirsch winks at readers in his made up, tongue-in-cheek bio that appears at novel’s end, but the truth that he’s a practicing physician in Maryland informs the book immensely. With macabre humor and terrific storytelling, he brings Seth safe but not unscarred through four grueling years of medical school that include rotations through a variety of medical disciplines. Where the author could have gone over-the-top with humor, he often plays it straight, relying on the inherent absurdity of a given situation. The doctor’s OB/GYN training, where Seth experiences an “equipment failure” while practicing a pelvic exam on his teacher, is worth the price of admission alone.

But just when you think Hirsch is playing the story only for laughs, an authentic moment arises, as when Seth opens up to a patient. “Sometimes there’s nothing you can do to prevent someone from dying,” he says. “And then you have to do the impossible: pick yourself up and move on to the next thing. And do it all over again. And again. And learn to like it. And realize you’re part of something amazing. Something important.”

The only downside of this book is its weak title. Echoing the comedic tone of the 1989 comedy Gross Anatomy, the novel’s affection for this uniquely strange experience makes it the best fictional portrayal of med school since ER. Readers will savor the experience.