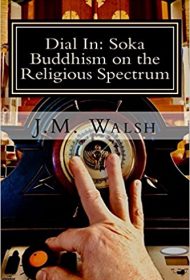 With simple, conversational prose and a solid knowledge of world religions, J. M. Walsh offers insights into Soka Gakkai, a religious sect derived from the teachings of 13th century Nichiren Buddhism and made popular in the 20th century by Daisaku Ikeda, a philosopher, humanist, and nuclear disarmament advocate. The author’s mission is three-fold: to position and show Soka Gakkai’s connection to other faiths; explore its “enduring messages”; and “anchor” its relationship “within the bounds of Buddhism’s verifiable history.”

Using the metaphor of an old radio as a central motif, the author examines aspects of eight faith traditions, including Hinduism, Buddhism, Daoism, Confucianism, Zoroastrianism, Judaism, Islam and Christianity, to show how different peoples “dial-in” to religious revelation in different ways. For instance, one group of religious followers may tune into devotional practices, while others, like members of Soka Gakkai, may focus on the reinterpretation of ancient dogma for modern times. Yet, the author argues, each of the religions is interrelated, pointing to an “ultimate reality of some sort.”

Dial-In is focused primarily on explaining and advocating Soka Gakkai, a faith centered around the Lotus Sutra, a literary work that unveils the wisdom of the Buddha. Here, Walsh provides useful insight into the sect’s foundational teachings, including the mantra Nam-myoho-renge-kyo, a chanting practice that helps activate compassion and honor the dignity of all people.

Walsh’s book is robust and informative. He’s a capable, level-headed teacher looking to shake off the shackles of superstition to showcase a practical faith for everyday living. His material on Zoroastrianism is sharp and smart; his through-line, in search of a perennial philosophy so to speak, is effective and well-argued; and he presents a level-headed examination of Nam-myoho-renge-kyo, a practice often misinterpreted by critics.

While the book’s first third on the interconnection of the world religions frequently lags, Walsh delivers overall a well-rounded examination of an often misunderstood faith.