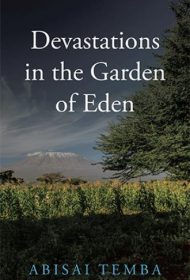 In Devastations in the Garden of Eden, Abisai Temba delivers a heartfelt wake-up call about the environmental devastation on and around Tanzania’s Mount Kilimanjaro.

Temba, a development consultant and former civil servant in Tanzania, begins by briefly describing the area’s people, flora and fauna.  Next, he discusses how humanity has wreaked increasing havoc on the area’s biosphere, blaming colonialism, industrialization and poor household habits, among other factors.

He also breaks down the various components of environmental degradation, including pollution, overpopulation and resource depletion, and offers ways that, through a combination of government intervention and individual choices, this degradation might be reversed.

Temba is clearly passionate about his subject.  His love for the region is evident when he reverently and poetically refers to the “stately migrations” of plants, writing, “Plants do move, infiltrating new territory by creep of root and shower of seed.” He also brings a nuanced, somewhat contrarian view to the topic of sustainable development, challenging the popular view that it’s unambiguously beneficial.

While the book delivers interesting information, it suffers from several problems. First, its structure sometimes feels unfocused. Temba discusses certain topics— for instance, the disappearance of snow on the mountain—in multiple places, when a less diffuse approach would make his narrative easier to follow. Sometimes, confusing sentence structure or a mechanical error obscures a passage’s meaning; for example: “[Emphasis on industrialization] sacrifices is people’s health and can cause a nation much more than the income that will be earned from industrial production.”

Additionally, most of the author’s assertions are unsourced or unclearly sourced.  For instance, Temba describes an evaluation of the Mount Kilimanjaro area “conducted by Dr. Thompson, a university professor from the United States,” without giving the title of Thompson’s study, or even his full name.

Overall, Devastations in the Garden of Eden is a thought-provoking, potentially useful work.  Addressing the aforementioned problems would enable it to reach a wider audience than is likely in its current form.