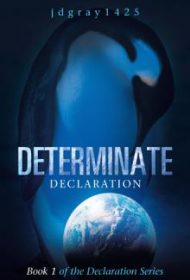 This futuristic science fiction novel sets the groundwork for the author’s planned series about technologically enhanced life after the Great Declaration—“a cataclysmic series of global pandemics in the early twenty-second century”.

The narrative consists of three stories that are parallel, rather than interwoven, and offer readers glimpses into this elaborate new world. A young psychopathic hillbilly is consumed by a “Darkness” that tells him to kill; a computer programmer must choose between two love interests; and a soldier becomes disillusioned with the cause he’s been fighting for all these years. The narrative leads readers to a vastly powerful artificial intelligence that may or may not be operating with humanity’s best interests as its top priority.

This book contains impressive world building, including the creation of only one religion – Forgism – that developed after the Great Declaration in order to comfort the surviving global human population, which plummeted from more than 15 billion to 200 million in seven years. People are physically enhanced beginning at age 18 with subcutaneous antennae and sensor rays extending throughout their bodies, which, among other things, subdue their sexual urges.

Explanations of these and other technologies used in this society are skillfully explained throughout each chapter in short sections labeled as various archives (cleverly disguised information dumps that provide backstory). Although the political, social, and religious concepts are slightly less easy to grasp, the writing is clear and the language accessible overall.

With three separate stories, multiple characters, and lots of complex backstory, readers will need to exert more effort in remembering and understanding details than in a traditional novel. And some may be disappointed that the book concludes with loose ends that presumably will be tied up in later installments.

Still, post-apocalyptic science fiction fans with a penchant for artificial intelligence and medical technology should enjoy the challenging scenarios and complex backstory presented in this intriguing new series.