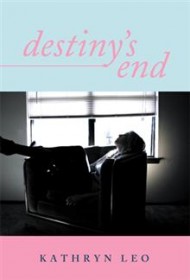 The notion of hurtling through time has captivated authors and readers alike since H.G. Wells published The Time Machine more than a century ago. There is something delicious about glimpsing what came before and knowing that the slightest alteration of events could trigger an entirely different future.

Australian author Kathryn Leo jumps into the genre with her futuristic novella, Destiny’s End. Her intriguing but ultimately incomplete tale centers on Ben, a history professor in the year 2100, chosen to travel back 80 years to witness the first in a series of eco-terrorism attacks that sets in motion Earth’s environmental demise.

Leo sets up her premise well, hinting at a dire future where war over climate change has ruined the planet and many people are forced to live underground to avoid violent weather patterns. On his mission, Ben is supposed to be invisible, observing the past from within a bubble. But suddenly that protection inexplicably shatters, and he becomes part of the past. He is forced to face his greatest fear of being trapped in another era and must resolve the inevitable dilemma of whether or not to interfere with history.

There is no lack of imagination in the slim book. The concept is intriguing, the twist of climate change is both timely and unique, and the main character, Ben, is mostly well crafted as a lonely man whose life in the present feels empty. But Leo’s book fails to live up to its promise as the author seems to skip to an improbably neat ending much too quickly. All loose ends – and there are plenty — are dispatched with little or no explanation. In her haste to find the end, she leaves readers hanging and unsatisfied. The love interest for Ben has generational implications but is sorely underdeveloped. Errors in punctuation are also a distraction.

Ultimately, Leo has published an adequate story when, with a little more effort, it could have been stellar.