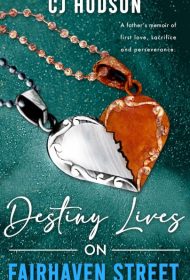 Author C.J. Hudson relates a troubled childhood and troubling adulthood in this saddening memoir addressed to his sons.

Hudson’s abusive, drunken father made his mother’s life miserable; later, she married another jerk, the aptly-named Dick. Hudson’s life is made bearable, however, by his feelings for a neighborhood girl, Danielle, with whom he falls deeply in love and to whom he proposes at the tender age of 13. But the two are separated when his family moves to Michigan to live with Hudson’s aunt.

Hudson never forgets Danielle and continues to consider her his destined girlfriend, despite evidence to the contrary. When his rage-driven father threatens him during a custody dispute, the judge stands up for him, giving him a view of a better life ahead. Girls start liking him, but his determination to be with Danielle and attempts at self-improvement drive the story.

Readers will appreciate Hudson’s difficult journey in overcoming his abusive childhood. Unfortunately, the ending of his story brings an unexpected and shocking revelation regarding his relationship to Danielle that makes readers question Hudson’s judgment when it comes to this romance.

It also calls into question the author’s self-awareness overall, as do other passages in the book. For example, in one scene in high school he references a female friend’s boyfriend as “controlling,” but then calls himself her “guardian,” noting, “Any boys who wanted to date her had to be vetted by me first” with no apparent sense of irony. There are many other moments like this.

Ultimately, Hudson’s story of devotion is more troubling than uplifting, undercut by a conclusion that brings an unsettling new perspective to the story overall.