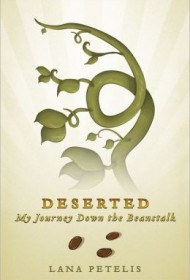 In Deserted, Lana Petelis retells the story of Jack and the Beanstalk from the point of view of the giant’s wife.

The unnamed heroine of Deserted grows up loving fairy tales that end with “happily ever after,” but even at a young age suspects that a handsome prince isn’t the cure for all of one’s troubles. When a large, uncouth man begins frequenting the restaurant where she works – and develops an appreciation for her cooking – her heart warms to him. As she and the giant spend time together, the young woman discovers his tender spirit. She accepts his marriage proposal and moves to his farm, where he keeps a magic harp and a goose that lays golden eggs.

The couple lives happily until a beggar named Jack arrives on the scene with a hard-luck tale of poverty and a magic beanstalk that leads him to the farm. The giant’s wife pities Jack, only to have him steal the harp and goose and send her husband plummeting down the beanstalk. But she has some magic beans of her own and goes in search of her husband and revenge.

Retelling fairy tales is a long and distinguished literary tradition, and Petelis has chosen a fresh perspective for her adaptation. In particular, she puts the beans from the original version to varied and interesting uses in her plot.

Unfortunately, the tale’s writing style undermines its substance. Frequent, inappropriate tense changes appear within paragraphs, and these, along with instances of overwriting (e.g., “moments that will forever be etched in my brain no matter how skillful time is in eroding such precious memories”) detract from the narrative’s flow. Most notably, the protagonist’s anguished tone as she tells her story feels incongruous with the relatively happy turn the plot takes at the end.

Deserted features an intriguing premise. It requires polishing to address the issues mentioned, however, in order to appeal to a wide audience.