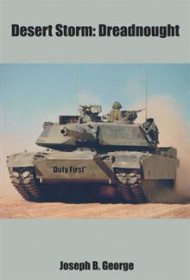 For all of the chest-pounding politicians and overheated pundits who are quick to recommend war, Desert Storm: Dreadnought should be required reading.
That’s not to say the slim memoir by former soldier Joseph B. George is perfect. It lacks depth and the writing tends to wander without fully exploring the incredible scenes it sets forth. Yet it is that very lack of sophistication and device that makes the book feel instantly raw and authentic.

George was a young soldier sent to Desert Storm — the first Gulf War, the supposedly “easy” one played out on TV like a video game. Yet for those on the front lines, battling in a foreign land, amid confusion and fear, along with a growing realization that the “enemy” was not so different than they were, there was nothing easy about it. One lovely scene occurs when George is separated from his unit and happens upon a young Arab boy who invites him home to dine with his family.

George’s real trouble starts when he returns home and feels disenfranchised from his former life. He drinks too much, fights too much, and cannot shake the feeling he is being stalked by an unseen enemy. He finds it hard to leave his couch. “Life after Desert Storm,” he writes, “is far worse than combat itself. I left Desert Storm a changed man, and everyone knew it but me.”

He also experiences strange physical reactions; he cannot walk up stairs or play basketball without being short of breath or feeling muscle pain — all symptoms of what is now called “Gulf War Syndrome,” which struck thousands of soldiers who were exposed to high levels of toxicity when stashes of Iraqi chemical weapons were blown up.

While readers may be left frustrated that the book does not more fully explore George’s war experience and its aftermath, it does its job in stripping away the myth that soldiers walk away from any war unscathed.