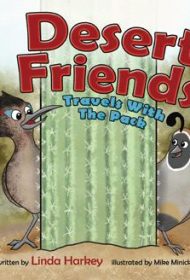 Offering a heavy helping of desert ecology with a dash of drama, Desert Friends is an informative picture book for young readers who enjoy learning about wild animals.

Desert Friends opens by introducing readers to a roadrunner and a Gambel’s quail, two friends in Arizona’s Sonoran Desert who love to race each other. Readers learn details about each of the birds, such as how the quail warms up after a cold desert night (by exposing his black feathers and skin on his back to the sun), how the roadrunner can outrun lizards, and what each likes to eat (the roadrunner loves lizards; the quail the green fruit of the honey mesquite tree).

Later, they meet two hunting dogs—but before the birds have time to worry about the hunter who will follow, a flash flood frightens all of them and sweeps up one of the dogs in its path. Together, the birds and the other dog rescue him. The hunter arrives shortly after, relieved to find his dogs safe.

Young readers with an affinity for learning about wild animals—particularly birds—will find a lot to like in the information the birds share about themselves through affable dialogue for the first half of the book. The engaging illustrations fit the tone of the story, and those depicting the sudden flood are especially dramatic and captivating.

However, the story is very text-heavy for a picture book, with long, multi-sentence paragraphs throughout. Although a less impactful flaw, the tonal shift from informational to dramatic rescue is too abrupt and feels like a forced attempt at spectacle in a story that is otherwise very light on plot.

Still, young readers who would enjoy two birds bickering over a tarantula will appreciate the humor and tone of Desert Friends—but may want to split this longwinded picture book into parts to tackle over multiple reads.