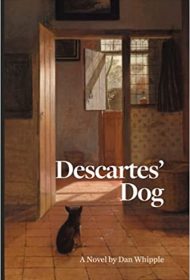 In this literary, historical mystery, the 17th century ideas of philosopher René Descartes (“I think, therefore I exist”) wend their way into modern day.

The book alternates chapters between 2019 and the 1600s. The former are told by a philosophy professor at the University of Colorado and the latter by Descartes. As the story opens, the professor discovers a memoir in the rare books library written by Descartes in the 17th century. Hoping to translate and publish the manuscript, thus assuring his place in the pantheon of philosophy professors, he steals the book.

But Descartes’ memoir is not the real find after all. As relayed in the 1600s’ passages, Descartes was entrusted in 1619 with finding a lost manuscript written in code and owned by Nicholas Flammel, a 14th century alchemist. The manuscript supposedly contained a formula for long life and for turning base metal into gold. Flammel, according to hearsay, had achieved both. The formula, however, disappeared through the ages. Whether then or now, competing secret societies are determined to find and decode it – and nothing will stop them.

Throughout the narrative, Descartes discusses philosophy, mathematics, religion, and other heady ideas, adding to a complicated, albeit informative read for anyone interested in Descartes or his logic, which is relevant even today. (For example, while Descartes adopts a faithful dog, he feels certain that all animals have no souls or reasoning – an argument still employed for using animals in testing drugs and cosmetics).

Author Dan Whipple is a skilled wordsmith who uses a lighthearted touch. The philosophy professor is witty and likeable, as is Descartes. Unfortunately, the book is overstuffed with plot and ideas and can be overwhelming. Between the philosophy, 1600s’ history, betrayals, and characters pursuing each other, readers may need a scorecard to track the proceedings.

Casual readers will likely struggle with Whipple’s book, particularly as the action heats up. However, those interested in philosophy, mathematics, and history will find much to contemplate in this literary adventure.