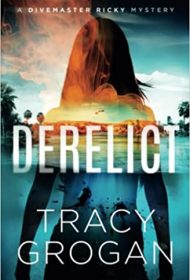 Once again, divemaster Ricky Yamamoto finds herself in hot water; this time, in Dahab on Egypt’s Sinai Peninsula.

When Sasha, a friend and fellow diver, vanishes and is presumed drowned, Ricky pursues her own investigation, believing he’s still alive based on his diving skills and knowledge of the area. Her inquiry leads to black market antiquities dealers, the police, and numerous thugs who mistakenly believe Ricky knows more than she lets on regarding Sasha’s whereabouts.

In addition to worrying about her missing friend, Ricky deals with an explosive fire that destroys the dive shop, where two employees lose their lives. On the heels of Sasha’s disappearance, one wonders if there’s a connection, adding to the intrigue.

Although this is a sequel to Flotsam, the first divemaster Ricky Mystery, it easily stands on its own. The author fill readers in on Ricky’s background and her penchant for questionable decisions that put her in difficult situations. For example, she says: “Locals discouraged solo hiking for women in this area for good reason. I regularly ignored the advice and had never been overly concerned” — that is, until she had good reason to be. In short, Ricky is a magnet for trouble, primarily on land rather than underwater.

Nonetheless, Ricky is a likeable character thanks to her self-deprecating sense of humor and zest for life. Descriptions of Dahab, dives and the surrounding area are vividly detailed, providing a strong sense of place. The novel moves at a brisk pace with Ricky alternately chasing, being chased or held at bay (including under questionable arrest).

Several grammar errors distract, along with some poor word choices. Even so,  readers will easily become invested in the numerous risky circumstances Ricky finds herself in and keep turning pages to learn how she fares.