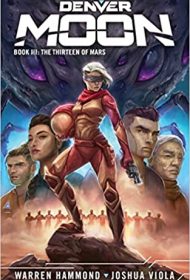 The rousing concluding volume of Warren Hammond and Joshua Viola’s Denver Moon trilogy pits tenacious heroine Denver against her biggest challenge ever: to stop technologically advanced insectoid aliens from annihilating humankind from her struggling Mars colony as well as those few left on the wasteland that’s Earth.

As the story opens, Denver is faced with multiple crises. After finding lichen on Mars, she realizes the ambitious terraforming plan her beloved grandfather Tatsuo Moon began decades earlier is working. But then she and her grandfather, the famed co-founder of Mars City, are attacked by deadly “bugs” and he’s left brain dead. To complicate matters, her eyes are failing and must be replaced asap.

With her revered Red Planet about to be overrun with waves of killer insect drones and her grandfather as good as dead, Denver does something counterintuitive: She leaves Mars for the global graveyard of Earth, seeking Dr. Stuart Werner, an insectoid alien who has spent years trying to subjugate humans through mind control. The brilliant Werner is the only possibility of saving her grandfather, but with humankind on the brink of extinction, Denver needs a miracle to bring her grandfather back from the brink and to save her race.

The story is powered by nonstop action, relentless pacing, and memorable characters (like Smith, the AI that lives in Denver’s gun, and Ghost, a Han Solo-like trader who’s much more than he appears). But it’s the seamless fusion of science fiction and darkly atmospheric pulp noir that makes this trilogy so unforgettable. For example, war-ravaged Mars is perfectly described as “the color of dried blood” when Denver returns to the planet. And Earth is “a dead hunk of rock” with “oceans a toxic soup that gradually but greedily lapped up the world’s coastlines.”