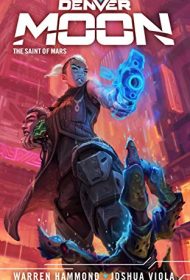 With the Church of Mars and its followers in an uproar about the seemingly unethical treatment of botsies (androids used for sexual pleasure and a variety of menial duties), Denver is hired to take down one of the church’s most radical leaders, a psychotic preacher who she helped get excommunicated, albeit temporarily, years earlier. With the help of her trusty AI sidekick Smith (whose essence exists inside her modified Smith & Wesson pistol), Denver sets out to assassinate the religious leader—only to realize that his conspiratorial plan involving the botsies goes even deeper than she first believed.

Paced at breakneck speed and powered by a cast of deeply flawed and sometimes endearing characters—alien shapeshifters, sexbots, religious charlatans, pimps, etc.—this saga’s magic lies in its pulp noir sensibilities. Most of the story takes place in the stinking subterranean passageways beneath Mars City and revolves around those who inhabit the city’s dangerous underbelly. The authors’ focus on sensory description gloriously brings the setting alive: “The market was busy this time of day. Shift changes up and down the levs crowded the tunnels of this ant colony of a city. Hawkers pitched their wares. Amplified by scratchy speakers, their garbled voices drilled into my ears. Cooks worked fryers and griddles inside cramped booths soaked in bright neon. Electric fans lured customers by blowing the enticing odors of spiced faux meat out into the thoroughfares.”

Hammond and Viola could be the illegitimate lovechildren of Raymond Chandler and Arthur C. Clarke. Science fiction fans looking for a rocket-fueled literary escape will find Denver Moon and her misadventures on the Red Planet highly entertaining.

In short, this is genre-fiction gold.

Also available in hardcover and paper.