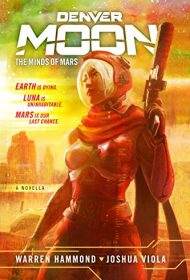 The story is set on a struggling Mars settlement in the near-future (2217). Denver Moon is an investigator whose life is turned upside down when she finds out her beloved grandfather Ojiisan—a founding member of the colony who has been presumed dead for 20 years—has been essentially marooned on a remote part of the red planet’s surface all that time. Moon also discovers that the colony’s other founder, Cole Hennessey, who is the leader of the Church of Mars, may have played a part in banishing her grandfather.

Once reunited with Ojiisan, Moon’s naïve perceptions of the world around her are shaken as she realizes how little she knew about that world, from the deadly red fever that has been plaguing the planet’s colonists to the ambitious but seemingly unachievable Jericho terraforming project. Moon’s search for answers leads her through the seedy underbelly of the Martian colony and, accompanied by a male sex bot and a sentient artificial intelligence named Smith (whose essence is inside her modified Smith & Wesson pistol), the bleach-white haired Moon eventually uncovers a grand-scale conspiracy that holds the future of humankind in the balance.

Gritty atmospherics (think Blade Runner on Mars) are exceptionally well-executed here, as are the setting, plot intricacy, and relentless pacing. The only criticism is that while Moon is fully realized, other main characters (such as the pilot Navya and preacher-turned-psycho Rafe Ranchard) are somewhat two-dimensional. But this is a minor issue.