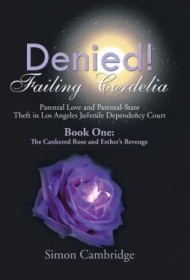 An anguished father explores his struggle to make sense of the loss of his adopted daughter through actions of a juvenile dependency court in this intense, detail-heavy memoir.

This first of a planned three-volume series covers events from 2007 through 2009. Author Simon Cambridge discusses his relationship with his wife, Esther, and what took place before and after they adopted 13-year-old Cordelia (a pseudonym) — a child who had been diagnosed with reactive attachment disorder and oppositional defiant disorder — from Washington State foster care. (Years later, Cambridge would link some of his inability to properly raise her to his later diagnosis with Asperger’s.)

Because of an incident involving the police that Cambridge says resulted from his own “misguided efforts” in child-rearing, Cordelia is quickly whisked away to Los Angeles, where Esther has moved during their marriage estrangement. Cambridge experiences trauma and frustration in dealing with what he calls a “dysfunctional legal aid child-welfare system” (details to be covered in the next book) that led to him never seeing Cordelia again.

This complex discourse intertwines Cambridge’s story with a wealth of supporting quotes from Shakespeare, Anne Brontë and Bob Dylan lyrics. Despite intelligent writing, its failing comes in the muddled arrangement of the story line and fact dispersion. The narrative hops, skips and jumps between timelines, unveiling details erratically. It is further bogged down by an avalanche of asides and lengthy footnotes.

With its nearly 100 pages of well-organized bibliographical references and resources, it could attract the attention of caring social workers and the parents he targets: “… who find themselves mired in America’s often byzantine Kafkaesque child-welfare and legal dependency system.” But whether someone will find the fortitude to read the subsequent books is debatable, particularly if they suffer from the same structural issues.