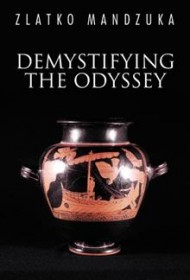 What new can be said about Homer’s The Odyssey? Quite a bit, according to Zlatko Mandzuka’s thorough attempt to “demystify” this classic poem that continues to fascinate, inform and entertain.

In the poem, Greek warrior Odysseus has been abroad for many years after the Trojan War, and the god Poseidon keeps a hostile eye on him. At home, suitors for his wife drain his resources and plot to kill his son. After storms, shipwrecks, and other harrowing adventures, he returns home, destroys the suitors and survives.

We know how it turns out, but have always been curious about the route Odysseus followed. Many scholars assume that Odysseus wandered through the Mediterranean Sea, Malta, Gibraltar, or even along the coasts of Britain and Norway. Mandzuka makes a strong case for the Adriatic Sea instead.

He also aims to “explain the creatures and phenomena” in the book and offers clever and believable natural explanations, especially for Scylla and Charybdis. However, his ideas regarding Odysseus’ visit to Hades and Circe’s turning men into swine seem far-fetched.

Mandzuka supports his theories with historical and literary texts, linguistics, topography, geology, a sailor’s knowledge of winds and weather, and a familiarity with Bronze Age ships and navigation. More than anything, he relies on the literal truth of Homer. If there’s a question, the answer is: What does Homer say?

The writing is passionate and the research documented in 24 pages of footnotes and literature. But the book is far too wordy and requires a content editor. Punctuation and spelling errors are common, for example: ”fare” for “far”; “same” for “came”; “sins” for “wind”; “ancor” for “anchor.” There is no index, which would be useful; the maps are helpful but difficult to decipher.

Nonetheless, because of its fresh research, major relocation of Odysseus’ route, and “demystifications” of the phenomena in Homer’s story, this title is recommended for academic or large public libraries, and for those readers who still sail Homer’s “wine-dark sea.”