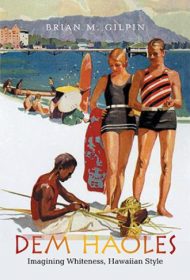 Gilpin engagingly draws from short stories, travelogues, novels, television programs and movies to delineate six haole archetypes: “gods, demigods, saints, seekers, rogues and vagabonds.” Throughout the book, he examines how various media portray these archetypes and how they reflect and justify various Caucasian approaches to Hawaii.

For instance, he characterizes McGarrett of the original Hawaii Five-O as a demigod: “In all things he is superior.” McGarrett makes “Hawaii safe for the local population…[and] for the larger American society that might view Hawaii as somewhat different, foreign, and maybe even dangerous.” This “safe Hawaii…is the fantasy paradise of the tourist and the relocated haole elite.”

Other archetypical explorations include Duane Chapman who, in Dog the Bounty Hunter, fulfills the saint archetype by preaching to criminals and holding services in “the back seat of a large black SUV.” The “underlying presupposition,” states Gilpin, is that Hawaii needs Dog “not only to apprehend criminals but also to save their souls.”

The common ground for each archetype, the author indicates, is that they reflect back “to all haoles a vision of the islands as a colonial outpost where they… can reign supreme and create for themselves their own tropical paradise.” Conversely, it presumes that “Hawaii’s people have little or no agency.”

This is an intriguing and well-supported conceit—although the narrative falters where the author forces characters to fit a mold. For example, William Conrad in Jake and the Fatman, is too obese to meet the standards of a demigod, so Gilpin uses the three main characters to fill the slot. Taken loosely, however, the author’s thoughtfully rendered archetypes help reveal haole function in Hawaiian society.

Those interested in Hawaii, as well as media and its power to shape audiences’ perceptions of themselves and the surrounding world, will find much of interest here.