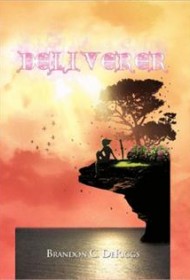 This ultra-violent, sexual fantasy follows the adventures of Rae, a young man tasked with delivering spirits to the afterlife. Rae is an orphan, friendless and directionless until he fulfills his destiny.

Rae’s particular means of transporting spirits is through a black river that runs from his shoulder to the tip of his middle finger. Spirits, including a tree spirit and a weaponized apple containing the soul of his grandfather, accompany him on his journey. At times, spirits emerge to help fight enemies trying to stop him.

Rae wages constant bloody battles with vicious men, horrific beasts, and lusty women. He encounters characters, including a morbidly obese opponent with deadly flatulence and a penchant for licking his own backside, an animalistic villain who carves his name into Rae’s chest, a sex-starved woman living inside a six-year-old girl’s body, a spirit fond of bestiality, a pervert with a dead-snake fetish, and a vampiress who defiles her newly deceased victims.

Rae will do anything to win, including shoving his dirty loin cloth into an opponent’s face. “Some hairs were left on his face when he finally managed to tear away that damn private-scented and stray hair-ridden rag from his face.”

While imaginative and ambitious, Deliverer’s flaws detract from its readability. An abundance of sound effects, symbols representing profanity, and all capital exclamations disrupt fluency (“…WHAAAAAT? He’s with my wife? [email protected][email protected]#[email protected]%@%#$%#%%#$%! Who the @%$#%# DOES HE THINK HE IS?”) This is especially curious as the profanity-laced text has F-bombs aplenty. Grammatical errors, such as “Her face twisted like a puppet as he winded [sic] up his legs” are rare, but distracting.

Given the juvenile approach to the subject matter (flatulence, immature sexual innuendo), it seems that mostly teenage boys would appreciate the author’s sensibility. But whether or not the material is appropriate for this audience is highly debatable. As such, it’s hard to imagine exactly what readers the author is targeting with this story.