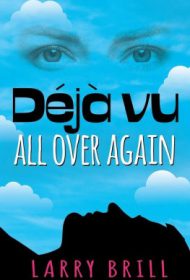 If you like romances but are tired of chick lit, Larry Brill’s novel is for you. The former TV anchorman has written a rom com from a man’s perspective, filled with sarcastic humor, bar fights and a hero who cares nothing about his wardrobe—but is as romantically confused as any chick lit heroine.

The novel opens just after Nate Evans’ mobile home is destroyed by an accidental bomb from an Air Force drone. Sifting through the remains, Nate reflects on how pitiful his life has become. His wife of a quarter century “crushed his heart like an empty beer can,” and his career as a “Hollywood hack for hire” has resulted in a dozen non-critically acclaimed screenplays.

If only he could have a life mulligan, Nate thinks, and relive his romance with his high-school sweetheart, Julie Cooper, which fizzled after he took another girl to the prom 40 years ago.

In search of that mulligan, Nate moves in with his hippie parents, recreates his childhood bedroom, complete with Raquel Welch poster on the ceiling above his bed, and takes a job as an English teacher at his old high school in San Jose, California.

The job is no coincidence; Julie is the school’s assistant principal. The only problem is that she recently became engaged. Nate quickly determines Julie’s fiancé is a schmuck and designs a Cyrano de Bergerac-style online dating plot to convince him to leave Julie. Meanwhile, Nate is writing a script about the whole scenario, appropriately titled Mulligan.

As in any good rom com, Nate’s path to love with Julie is full of twists. But what sets this book apart is the middle-aged male perspective. There is more thought than feeling, more action than soul-searching, more com than rom. But Brill’s finely crafted prose ensures the book doesn’t devolve into schoolboy humor.

The result is a fun, satisfying read that will particularly appeal to older readers looking for romantic mulligans of their own.