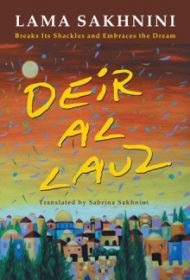 In short chapters told from varying points of view, Sakhnini tells the story of twin brothers Omar, a cerebral physics teacher, and Basheer, a millworker. Omar’s education opens the world to him; while a student in Beirut, a professor suggests him for a scholarship to New York University, but he refuses to leave the fight for his homeland (the fictional Deir Al Lauz). When the professor asks how he can refuse such an opportunity and makes it clear the alternative is surely death, Omar responds, “What would I do with a PhD in theoretical physics and no country?” His militancy comes to affect him, his brother, and the women they love in disastrous ways.

Sakhnini’s decision to shift point of view from chapter to chapter allows readers inside each character’s head, but it can take time to figure out who’s talking and is initially disorienting. It also makes it difficult to follow a character’s individual story arc, because we’re seeing the plot through various perspectives.

The story’s best passages are vignettes that capture daily life in occupied territory. For example, at one point, Omar is at a new job teaching math to kids: “He saw a girl with ginger hair bound in the back with a rubber band. Her fingers were as slender as spider’s legs. She was carrying a Kalashnikov. She took it apart with the sure confidence of a fighter, and she polished the pieces with an oily rag. She greased it and then with swift fingers put it together again.”

With its beautiful cover design and a translation that imbues the everyday with poetry, Deir Al Lauz is a provocative work of historical fiction—one that still speaks to the politics of the present day.