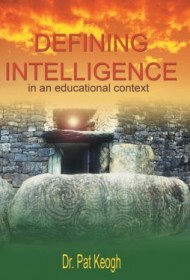 Dr. Pat Keogh, an educator with a background in philosophy, has written a book about the nature of intelligence and how it is measured, as well as the implications for pedagogy. He argues that educators should encourage creativity in the arts and sciences rather than relying on a system that assumes intelligence may be reduced to a quantity, be it IQ or any other test score.

“Intelligence is essentially spiritual and unquantifiable,” Keogh writes. “The physical body is essentially material and quantifiable … We educate the whole person keeping in mind that s/he is an intellectual being with a material body rather than a body with a mind.”

The author’s interest in intelligence from the perspective of the mind-body problem leads him into a survey of current views on neurophysiology, philosophers from Plato to Wittgenstein and psychologists from Jung to Piaget. He also discusses the distinction between conditioning and indoctrination and popular theories of emotional intelligence (Daniel Goleman) and multiple intelligences (Howard Gardner).

Through these touch points, Keogh emphasizes the irreducibility of the mind to its material substrate (the brain) and counters any reductionist approach to defining intelligence. For Keogh, intelligence is the ability to reason and to comprehend reasonable arguments as well as the intellectual engine powering developments in science, engineering, art, music, architecture, literature and other creative fields. For him, intelligence also includes the realm of dreams and daydreams that Freud called the unconscious.

Keogh’s rejoinders to the great thinkers are hasty. Entire books could be written, for example, on the implications of Wittgenstein’s philosophy of language for the author’s concerns, a matter dispatched in a few pages here. On the other hand, his views on pedagogy, which appear to be directed against the trend of applying business-style metrics to education, are worth a hearing. Although the reader gets the sense that Keogh has bitten off a bit more than he can chew, his ideas make for compelling reading overall.