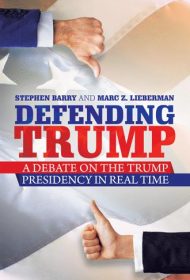 If anyone, say 60 years from now, stumbled upon Stephen Barry and Marc Lieberman’s Defending Trump, he would find a characteristic sample of the attitudes, indignations, furies and hopes surrounding the 45th president of the United States. Spanning the days between July 29, 2017 and April 12, 2020, Defending Trump is a collection of texts sent between Barry and Lieberman.

Barry, a lawyer, is a Trump supporter, in part because he believes Trump “has been successful.” His policies, according to Barry, “have achieved low unemployment, economic growth, and the destruction of the ISIS caliphate.” He also believes the president has been the “target of an illegal effort to delegitimize his election and remove him from office.”

Lieberman, a physician, believes that Trump “has a uniquely self-centered view of the world.… It revolves around him.” He thinks that all Trump cares “about professionally is money,” and that he is “being blackmailed.” He has, Lieberman asserts, “changed the course of our foreign policy to one that cozies up to dictators and pseudo-dictators.”

The writers, who have held a “lifelong friendship,” discuss everything from Trump’s foreign policy (including stances taken with Israel, North Korea, Russia and China) to the Mueller Report, Trump’s affair with Stormy Daniels, immigrant family separation and the Supreme Court appointment of Brett Kavanaugh. There’s nothing remarkable in the authors’ thinking, but they are apt exemplars of citizens in these times. Lieberman, for instance, sees the separation of immigrant children from their parents as an atrocity. Barry states “the children are well cared for,” and views the separation as a practical response to a situation that should be changed by law.

Weighing in at 774 pages, however, the book is exceedingly long and unlikely to interest readers to the end. Certainly, some of the less informative texts could be cut. (“November 18, 2017: Marc. Kushner under oath. Stephen. We shall see.”) None of the entries are framed with explanatory statements, and sometimes it’s difficult to discern what the text is about. For instance, Lieberman begins one missive with “Any Republican presidency would pursue that.” What, exactly?

Nonetheless, with judicious editing, this book might appeal to readers (especially future readers) interested in the Trump presidency.