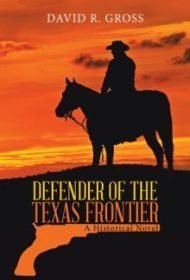 John Coffey (“Jack”) Hays was the most famous and charismatic of the Texas Rangers during his tenure in the mid-1800s. In this meticulously researched novel, David R. Gross brings Hays’s story to life as narrated by his best friend, John Caperton and various other friends and enemies of the heroic lawman.

At 19 years old, Jack and John leave their homes in Tennessee and arrive in Nacogdoches, where Jack begins to establish his reputation by killing the town bully in self-defense at the local saloon. The bully is the first of many to meet their maker shortly after making Jack’s acquaintance.

This is a violent time in Texas, as settlers advance on lands previously held by the Comanche and/or the Mexican government. After joining a group under the command of respected leader “Deaf” Smith, Jack quickly rises through the ranks to captain, then colonel, of what became known as the Texas Rangers.

By copying the tactics and violent cruelty of the Indians and Mexican military, Jack and his men are successful in wiping out many threats to the encroaching settlers. One of the amazing facts the author discloses is how Jack’s troop kept being disbanded because of insufficient funding; yet, when they were needed, the same men who hadn’t been paid before came back repeatedly, just to serve with Hays.

Some of Hays’s and his Texas Rangers’ exploits in this episodic novel are so similar that they border on repetitious. However, such similarities merely emphasize Hays’s remarkable career and make one wonder how he possibly survived. Gross doesn’t mince words when describing the atrocities Jack and his men visited on their enemies, and some will be shocked that the “good guys” were every bit as sadistic and vicious as the Comanche warriors and Mexican army.

In all, Defender of the Texas Frontier is a fascinating window into a little-understood period in America’s past, as well as an absorbing story about one hero’s westward expansion.