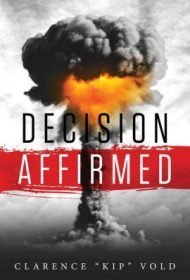 Vold’s title refers to Truman’s decision to use the atom bomb to conclude hostilities with the Japanese in 1945. Vold employs his account to affirm Truman’s decision in the face of “critics/revisionists,” who question whether the use of atomic weaponry was necessary to end the war.

The author’s primary reason for supporting Truman’s decision is his agreement with the president’s desire to minimize further casualties of U.S. military and civilian personnel. Vold emphasizes the ferocity of Japanese resistance (particularly the fighting in Okinawa) and quotes Truman as worrying that a conventional invasion of Japan’s home islands could become “an Okinawa from one end [of Japan] to the other.”

Most of the book, however, is a comprehensive chronology of war in the Pacific theater. While Vold’s work is commendably detailed, too often the detail becomes overwhelming. One can understand, for example, why it’s important to list the expenditure of artillery rounds in major battles, but doing the same for more minor skirmishes risks straining readers’ attention spans. In other instances, Vold provides exhaustive commentary on the geography of the island warfare without maps or other visual aids to orient readers.

Another issue is his inconsistent use of citations. Some intriguing subjects, such as a soldier’s post-mortem receipt of the Medal of Honor for his bravery in battle, lack citations—omissions that are likely to frustrate readers interested in further exploring these subjects. The work is also rife with grammatical errors and repetition. More than once, Vold repeats his arguments almost verbatim, including his discussion of whether morality plays a role in assessing Truman’s decision and whether there can ever be a “‘moral’ war.”

Vold’s arguments in support of the U.S.’s use of the atom bomb are convincing, if not particularly unique. The flaws mentioned, however, will greatly limit his potential reading audience.