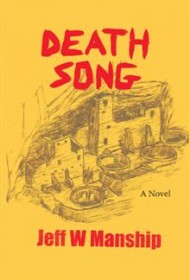 After the first few pages of this engaging historical novel, readers know how it will end, but getting there will be a journey of surprises. Set in the still-rugged and sparsely settled West of the late 19th century, it’s the story of two outsiders struggling to come to terms with each other and the rapidly changing world they inhabit.

The narrative begins with Philo Hatch, a Mormon driven west by the hostility of non-believers and bent on learning all he can about his new home. Toward that end, he is interviewing Juliano, an Indian orphan adopted as a child by Apaches, who is awaiting execution for the murder of a white family and the abduction of Philo’s daughter and two nephews. As the intertwined stories of the two men unspool, they reveal a land of violence, misdirected hatreds and distrust — with results approaching the tragic.

Juliano’s world is one of peyote-fueled visions and dislocation, scarred by massacres and betrayals, futile raids against encroaching Mexicans and, later, against the hordes of whites pouring in from the east. Among these last are Hatch and his fellow Mormons, for whom it has also been hard. Clashing over such things as the interpretation of God’s calling and “plural marriage,” the saints are also beset by human failings and disagreements.

The two worlds collide over a set of ancient but indecipherable writings (guarded by a mysterious and equally ancient tribe) that both Mormons and Indians suspect may be vital to their fates. Though we never learn what the writings mean, by novel’s end we have learned how two people driven into conflict can be struggling against similar demons of misunderstanding and mistrust.

Aside from maintaining firm control over an often-complex plot, the author has created lively, well-drawn characters who interact in always believable ways. The result is a story of depth and scope that presents a riveting portrait of a stressful time in the settlement of the American West.