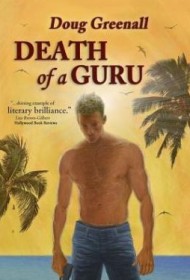 The novel opens with a bang in 1986 as Dr. Devon Clarke, a world-renowned orthopedic surgeon, engages in a fierce road battle, pitting his Porsche Carrera against a gang of angry bikers in the backwoods of Massachusetts. Following this introduction to the good doctor’s penchant for violence, we learn that he has been scarred by the death of his five-year-old son, who perished in his arms of a gunshot wound.

Some years later, Greenall introduces his protagonist, Magnus Larsen, a once-promising graduate student who has made his way to a quiet corner of Thailand, where he gives boat tours to tourists and enjoys the jungle’s potent weed. One day, two members of a cult called “The Children of a Loving God” show up at his door with an entreaty from their leader, Devon Clarke, which turns out to be a Glock handgun and a request that Larsen murder the good doctor.

Larsen reluctantly boards Clarke’s yacht, where he becomes entranced not only by the charismatic healer, but also by Anna Schott, a beautiful young convert, and her younger sister Amy, who has Down’s syndrome. After Clarke commits an unspeakable atrocity against the two sisters, the novel becomes an act of revenge as an increasingly unhinged Larsen tracks his deranged host across half of Southeast Asia, vowing payback for Clarke’s trespass.

This is a startlingly well-written, fast-paced and exciting novel with a heightened emotional tension and a poetic, noir-like prose that lends the book an ambitious, propulsive pace — not to mention a plot twist that lingers even after the final denouement has played out.