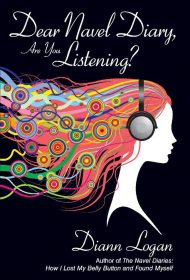 In this book of short essays, Diann Logan searches for “competent maturity” as she navigates her way through late middle age.

Logan’s pieces—generally around five to six pages—are pleasant and can be amusing as she contemplates everything from getting rid of inherited clutter (fox-collar coat, anyone?) to finding a whisker on her neck. Each chapter deals with a particular topic that leads to a metaphor about life and the path ahead. The title of the book refers to a change in her “formerly fabulous” navel after a couple of bouts with pneumonia changed her “in-ey” to an “out-ey.”

The author’s writing style is straightforward and unembellished. Logan is at her best when telling stories from her life, as when she talks about the family’s disastrous camping trips or having fun at grandma’s house with a simple paper punch. Or when she recalls particularly poignant moments, such as the time her father rescued her as a rebellious teen from a friend’s Christmas party, “…There was my dippy, dorky Daddy, still in his church clothes…beckoning me, rescuing me…His 1954 robin-egg-blue pickup was standing at the curb…engine running, heater blasting.”

Often, however, her stories are based on over-worked tropes on aging: skin problems, the search for form-fitting jeans. And frequently, her observations seem too obvious. Unraveling her knitting to correct a mistake, for instance, leads her to this conclusion: “There are other things in my life that have had to be un-knitted…Why should I try to re-knit them into what they were before?…Change isn’t so hard when an old notion is completely dismantled and replaced with something that fits.”

Despite such predictability, there’s a lot to be gleaned from Logan’s essays. Those who are close to her age will relate to some of her childhood recollections, while readers who are similarly struggling with aging may take comfort from knowing that she feels their pain.