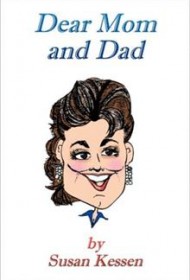 Most people living in today’s crazy, dual-income, married-with-children world have plenty of funny stories to share. But no matter how delightful these tales from suburbia may be to friends and family, it’s another matter to assume everyone will share in the hilarity.

Susan Kessen, author of Dear Mom and Dad, is probably a great raconteur in her circle. Her anecdotes from the front lines of her life as a wife and working mother of three daughters – told in letters to her parents – show that she has a storyteller’s gift of voice and detail. But like others who have waded into the crowded mommy-lit waters, she fails to understand that readers need a reason to care about her family. Family anecdotes can be funny — or sad, or touching — but they must also illustrate some larger message.

Kessen explains that the book comes from saved letters chronicling her family’s adventures that she sent her parents over a period of four years. (It’s unclear how much the letters were doctored for the book; she admits condensing them to make it appear as if everything happened within one year.) It’s a charming premise. And she certainly has the material to work with, such as losing her kids in the subway and a series of elaborate pranks played on her husband, including secretly loading his suntan oil with glitter paint and waiting for him to notice.

But the conceipt suffers from being overly cutesy and trying too hard to be funny.
More troubling is that the comedy of errors befalling her family is surprisingly hard to relate to. By working so hard to make a joke out of everything without even a hint of the anxiety and self doubt that plague so many working mothers, she distances herself from her target audience. In the end, her book feels less like a glimpse at a real family and more like a carefully packaged sit-com with a built-in laugh track, ultimately limiting its appeal.