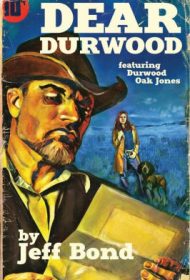 Jeff Bond’s Dear Durwood, part of his Third Chance Enterprises series, offers an unusual crime-fighting character: an ex-Marine who lives on a West Virginia farm and helps people who contact him by mail through an ad in Soldier of Fortune. He chooses the most interesting pleas forwarded by the magazine.

As the story begins, Durwood takes off in his Volkswagen Vanagon with his aging dog Sue-Ann to visit Carol Bridges, the mayor of Chickasaw, Texas. Bridges has written him of her suspicions regarding lawsuits filed against a manufacturing company that’s the economic heart of her town. She suspects foul play from “East Coast lawyers and investment bankers.”

Durwood has a deep dislike of lawyers and decides to help. After visiting the factory to bluntly ask its CEO about Bridges’ misgivings, he’s attacked by four men. And from there, the plot pits this seeming country bumpkin against the powers of corporate greed as he discovers the company will be sold in a few days to a venture capital firm that will likely strip the factory of its assets and lay off its workers.

The writing is crisp and the narrative moves quickly once Durwood gets attacked (in Chapter Four). Bond has a knack for vivid similes, such as this when Durwood is first assaulted: “He pushed the fist back at the man like bad cantaloupe at a roadside stand.”

Ultimately, though, the plot seems a bit thin and the bad guys almost comic-book-like. The narrative unfolds like a TV series’ episode and can be rather predictable. However, Bond delivers a twist at the end that readers won’t see coming.

The story frequently references Third Chance Enterprises, a “freelance small-force, private arms team” that includes Durwood and once “saved the world from anarchist hackers.” Because the group isn’t central to this story, the references can be distracting.

Still, this is largely a fun read, one that may spur readers to seek out other Third Chance Enterprises stories.