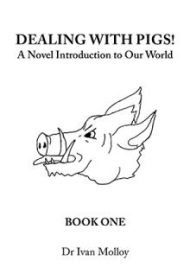 Ivan Molloy’s novel, Dealing with Pigs!, is an allegorical exploration of class and class struggle in the tradition of Orwell’s Animal Farm.

The novel’s world is populated almost exclusively by pigs, including the working class (dubbed the “trotters”), farmers (the “scratchers”), military (the “boars and tuskers”) and greedy capitalists (the “snouters”). Prompted by the teachings of Crumpet, a Marx-like crusader, the trotters unite to overthrow the snouters and create a society where all pigs are equal. Calling themselves “snotters,” the new, ruling communists work to create a society where “no pig shall profit from another’s labour.” Housing and education are made available to all, and female pigs are given equal rights.

Predictably, this new social structure devolves into a Stalinesque dictatorship with a former revolutionary, named Snooper, calling the shots. Under Snooper, some pigs are entitled to more than others, and dissenters are imprisoned or murdered.

In his creation of a pre-communist milieu, Molloy alludes to the communist critique of religion. Pomponer and Pimlico, as heads of rival religious sects, equally manipulate the masses for their own gain. Molloy also expands his fictional universe to include rival brands of communism.

The author is at his best when portraying his characters’ brief expressions of joy: Crumpet “began to jog around, bouncing, clicking his hooves and laughing as he went.” But the unrelenting cartoon character of his tome may become wearing for some readers; for example, the communists’ weapon of mass destruction is a “flying mudbath” powered by pig flatulence, carrying bombs of pig excrement.

At 534 pages, the book is also overlong and needs tightening; back stories such as one which tells of a village capture by minor characters could easily be eliminated.

Ultimately, the story is highly derivative of Animal Farm. The latter is far more powerful —and blissfully succinct.