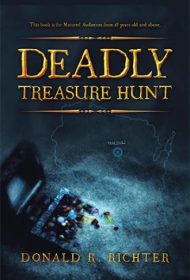 The story begins with a group of bored gamblers at a Las Vegas casino deciding to create a treasure hunt to shake things up. Three teams of five people are chosen to follow clues hidden in “machines shaped like questions marks.” They also hunt for “markers” that contain cash. The winning team earns prize money, as does the gambler who bet on the right team.

The rules of the game are hard to follow and the physical appearances of the “question marks” and “markers” are vague. Only mid-way through the story do readers learn that the question marks are made of steel, ranging from six inches to six feet, but it’s never clear what sort of “machines” they are. Readers are left on their own to picture the markers.

This is the first of numerous problems. Most problematic is the lack of tension. Although the clues are maddeningly vague—for example “glider” or “pump”—team members quickly, almost miraculously, discern their meaning. Arriving at the hinted-at location, they effortlessly find the next clue by asking workers on site if they’ve seen a question mark. Invariably, they have. Occasionally, someone gets hurt – one man breaks his leg, another tangles with a tiger at a circus— but the wounded are quickly whisked offstage, replaced by new competitors.

The characters are crass and one dimensional, and the back cover notes that this is an “ADULT” book, with “blue” jokes embedded throughout. Thus, the treasure hunt is often slowed as a character tells a long, irrelevant joke – often racist, misogynist and otherwise offensive.

In sum, while the idea of a treasure hunt could be appealing, the novel requires a thorough revision to find an audience.