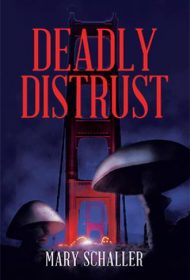 In this mystery/thriller, a nursing student discovers her roommate has been leading a secret life that threatens to put them both in danger.

Gina Williams and Elly DeMartini share an apartment in San Francisco in 1979. Both are divorced, and Gina is enjoying her newfound freedom from an abusive husband. When Gina is poisoned under mysterious circumstances, Elly tries to help Gina’s brother Todd, a police officer, learn who killed Gina and why.

Todd is obviously attracted to Elly and asks her to take over Gina’s part-time job at a cardiology clinic for possible leads. Their search soon narrows to a handful of characters. Could it be a doctor at the clinic? Gina’s abusive husband? The mycology professor at the nursing school? Or the doctor’s wife who turns out to have a surprise relationship to Elly?

While the set-up is promising, the novel suffers from several flaws. The author overreaches trying to keep an element of mystery, as when she refers to two of the characters as “the pusher” and “the addict,” rather than using their names; this confuses rather than intrigues.

Additionally, careless errors, both major and minor, require correcting. Elly and Gina are either two years apart (page 41) or four years apart (page 4). The police claim to be conducting DNA tests on an unborn fetus to threaten a suspect— even though DNA wasn’t used in police work until 1985. And so on.

Finally, the author relies on too many coincidences and unbelievable moments that never add up. For example, in the first chapter, Gina is dramatically attacked and nearly choked to death by her soon-to-be-ex-husband, yet several weeks later, he helps her move into her new apartment.

The story requires editing to help the author clarify various plot points and character motivations, awkward syntax and stilted dialogue. The author has a strong sense of place and clearly knows San Francisco, but that’s not nearly enough to create a satisfying thriller.